Skip to content
HomeDisplayGrand Quartering of the Kingdoms of the SCA

Quartering is the practice of displaying two or more arms on a single escutcheon, each inherited by the individual bearer from their parents. The display of each quarter is a testament to the value of that armorial bearing. Consider the arms of Queen Elizabeth II, who (like her predecessors) displays the quartered arms of the England, Scotland, and Ireland. While Her Majesty has many other bearings and titles to her name, these are considered the most prestigious and important of her armorial holdings. 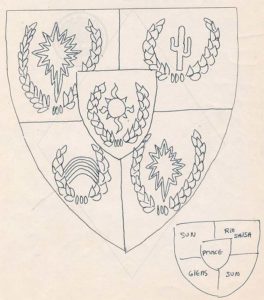 In looking at more complex armorial bearings (e.g. the arms of Charles I of Spain), it occurred to me that a Grand Quartering of the kingdoms of the SCA would be an interesting exercise. This interest was compounded when I found this page in the Laurel archives, labeled “Proposed Marshalling of the Arms of the Provinces of the Principality [of Atenveldt] with the Arms of the Crown Prince,” dated February 1972.

So without further ado, here is the progression of quartering the kingdom armorial holdings of the Society for Creative Anachronism.

This was a fun project, and I hope that my thought processes help others in exploring this practice in their own displays.