Skip to content
HomeDesignHow to Avoid Marshalling in SCA Armory

Disclaimer: The information below is accurate as of the publication of the March 2021 Letter of Acceptances and Returns. Though it is built on rulings that I made as Wreath, the contents contained herein are my own opinion and do not carry precedent on their own. That said, I know whereof I speak.

The Standards for the Evaluation of Names and Armory (SENA) are the rules by which submissions are gauged by the College of Arms. Under the armory portion of the rules are seven sections, one of which is section A6, Claims of Presumption, which seeks to prevent people from making false claims to honors, powers, properties, or relationships that do not belong to them. In this article, we will be looking at the subsection on marshalling, and how to apply the rule to ensure that your submission is not making a presumptuous claim through marshalling.

Marshalling is the application of one or more techniques by which an individual may display more than one piece of armory to which they are entitled. There are myriad examples of period marshalling and cadency described in Heraldic Cadency by Robert Gayre of Gayre and Nigg, the main source document for both the RfS and SENA guidelines on conflict. These will be covered in a later article.

However, only three forms of marshalling matter for purposes of presumption* in SENA A6F: impalement, dimidiation, and quartering, here illustrated using the arms of England and France. 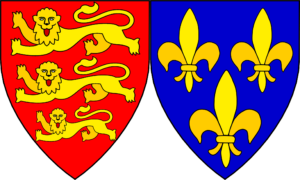 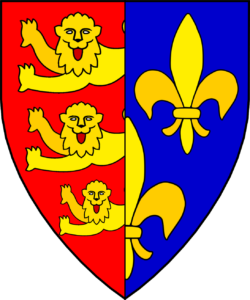 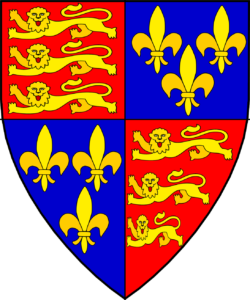 These forms of display are very common in period, and are so iconic that many submitters feel that the best way to design armory is to start by dividing the field into two or four parts and then placing disparate designs into each part. However, rather than creating a cohesive whole, the effect instead gives the appearance that the submitter seeks to claim two or more separate armorial designs. SENA A6F exists to make sure that such designs avoid the appearance of presumption.

SENA A6F, titled Claims through Marshalling, has three subsections: Designs which don’t create the appearance of marshalling, those that do, and those that may or may not. Each of these, in turn, has a singular rule for consideration:

These ten rules create a checklist for verifying whether a submission is considered marshalling or not. Like most of SENA, this rule set is designed to be used as a workflow: If a rule says definitively that an armorial design creates or doesn’t create the appearance of marshalling, subsequent rules cease to apply. There are very rare exceptions to this which are spelled out in the rule, but it will be true an overwhelming majority of the time.

Let us consider the following armorial designs, and walk each of them through the rule set: 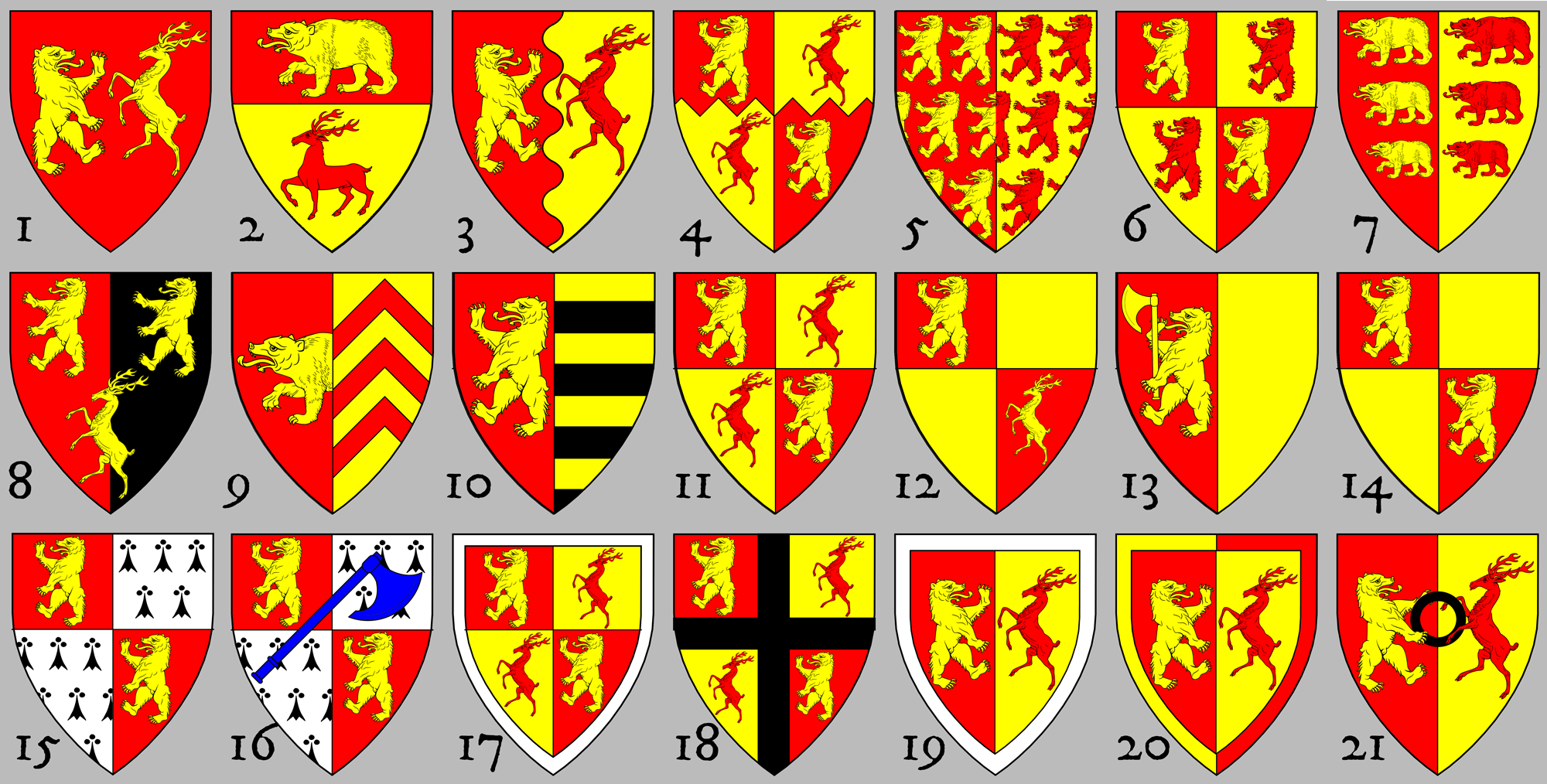 Designs which do Not Create the Appearance of Marshalling

Taking the rules in order, the first rule is A6F1a, which states that “Only designs with per pale and quarterly field divisions are potentially marshalled. Designs with another field division or no field division are not marshalled under these rules.” As design 1 has a plain field and design 2 is divided per fess, they are not considered marshalling. However, the rest of the designs are either divided per pale or quarterly, and so move on to the next rule. 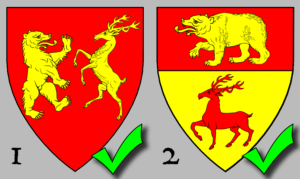 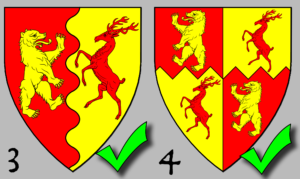 Note: Design 6 could be interpreted as quartering the arms Gules, a bear rampant Or with Or, a bear rampant gules. Likewise, design 7 could be interpreted as Gules, in pale three bears passant Or impaling Or, in pale three bears passant gules. However, the likelihood of two families with such similar armory being marshalled like this is highly unlikely, so submitters are given the benefit of the doubt.

The last bit of A6F1c is an important qualification. It reads “Special rules affect designs with peripheral ordinaries and quarterly field divisions with primary ordinaries like crosses; they are discussed in section 3 (A6F3) below.” What this means is that armory with a quarterly field division and a central ordinary, like design 18, or armory with a peripheral ordinary, such as designs 17, 19, and 20, bypass rule A6F2 entirely and move straight to evaluation by A6F3.

The preceding rules didn’t clear the rest of the designs: either they have multiple charge types, or (as in the case of designs 14 and 15) the layout of the charges doesn’t cover the entire field, so they progress forward. 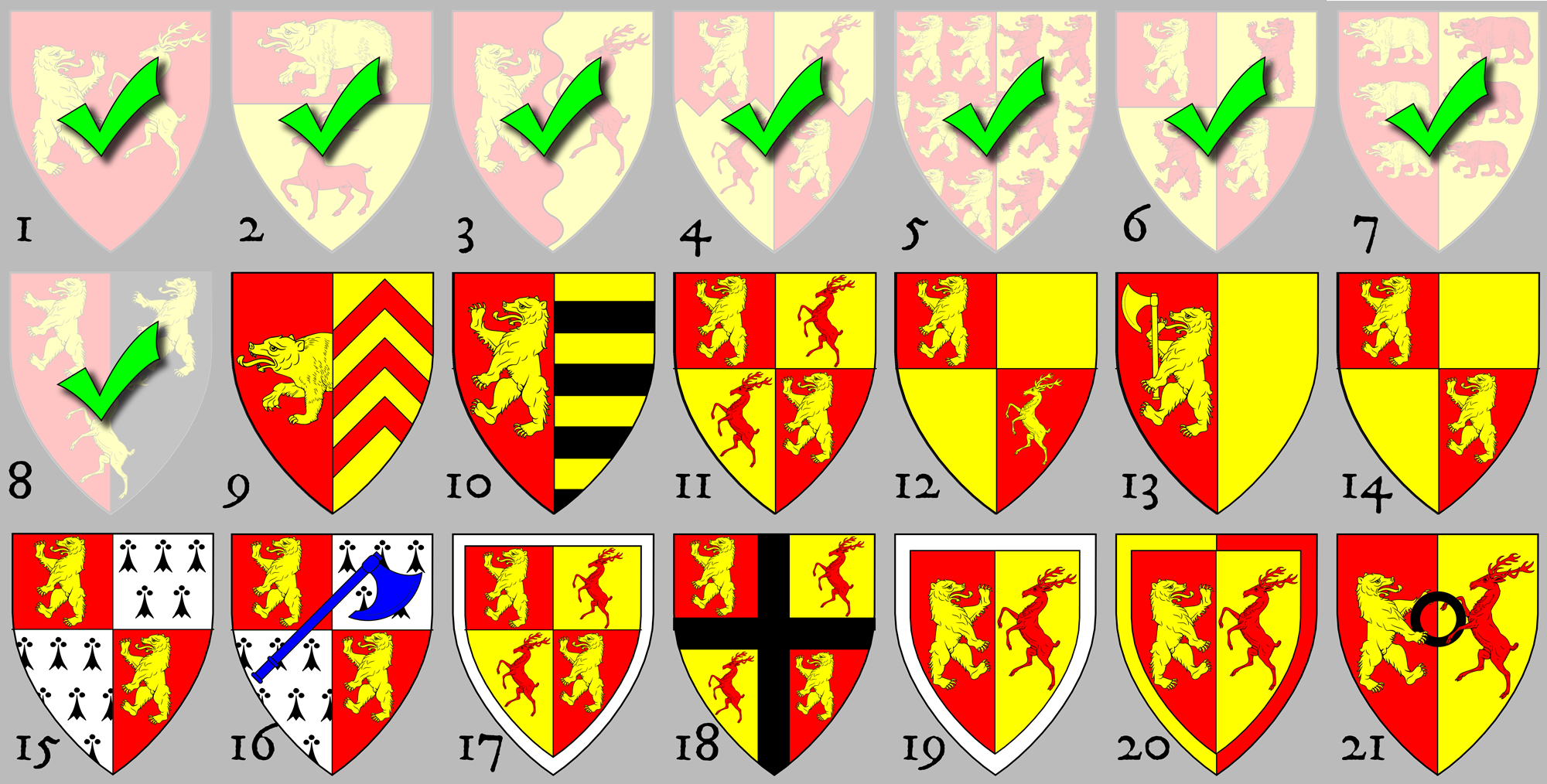 Designs which Create the Appearance of Marshalling

In this next section, if rules demonstrate that a section of the submitted armory “can only be understood as an independent piece of armory, it creates the unmistakable appearance of marshalling” which will prevent the submission from being registered.

A6F2a states that “When a charge or charges terminate at the edge of a section, it creates the unmistakable appearance of marshalling. This most commonly occurs with ordinaries. This includes both the situation where a field division appears to be multiple ordinaries and the situation where multiple ordinaries appear to be a field division.” In design 9, we see two examples of this rule in action: The chevrons on the sinister side terminate at the line of division, as does the bear passant on the dexter side. The former appears to be an impalement of the arms Or, three chevrons gules while the latter appears to be a dimidiation of Gules, a bear passant Or. Either the dexter or the sinister side would be enough to eliminate the design from consideration.

A6F2b states that “A section of the field which is divided further into multiple parts generally creates the unmistakable appearance of marshalling. Such designs can only be registered when it is demonstrated to have been used in similar designs which are not marshalled.” Lozengy and checky are two such examples which have been used in non-marshalled arms, but barry is not. Therefore, design 10 is eliminated for appearing to impale Gules, a bear rampant Or with Barry Or and sable. 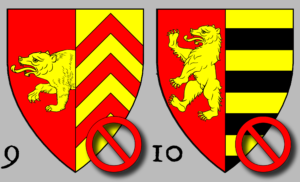 A6F2c states that “When different sections of the field contain different types of charges, it creates the appearance of marshalling.” This eliminates designs 11 and 12, which have bears and stags on different sections of the field. The former appears to quarter Gules, a bear rampant Or with Or, a stag rampant gules, while the latter appears to have independent displays of Gules, a bear rampant Or, Or, and Gules, a stag rampant Or. While the plain Or fields would clear the design from the appearance of presumption in a later rule, here the bear and stag quarters appear to be independent displays of armory.

Note that this rule would have also eliminated designs 17-20, but A6F1c cited the special circumstances by which this rule is avoided.

A6F2d states that “When any section of such a field contains multiple charges of the same type in a way that cannot be described as a standard single pattern covering the entire field, multiple charges of different types, or multiple charge groups, it creates the appearance of marshalling.” This eliminates design 13, which has a bear holding an axe on one side of the field, an apparent independent display of Gules, a bear rampant sustaining an axe Or. 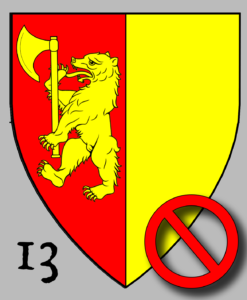 The rules did not eliminate the rest of the designs, and so they move forward. 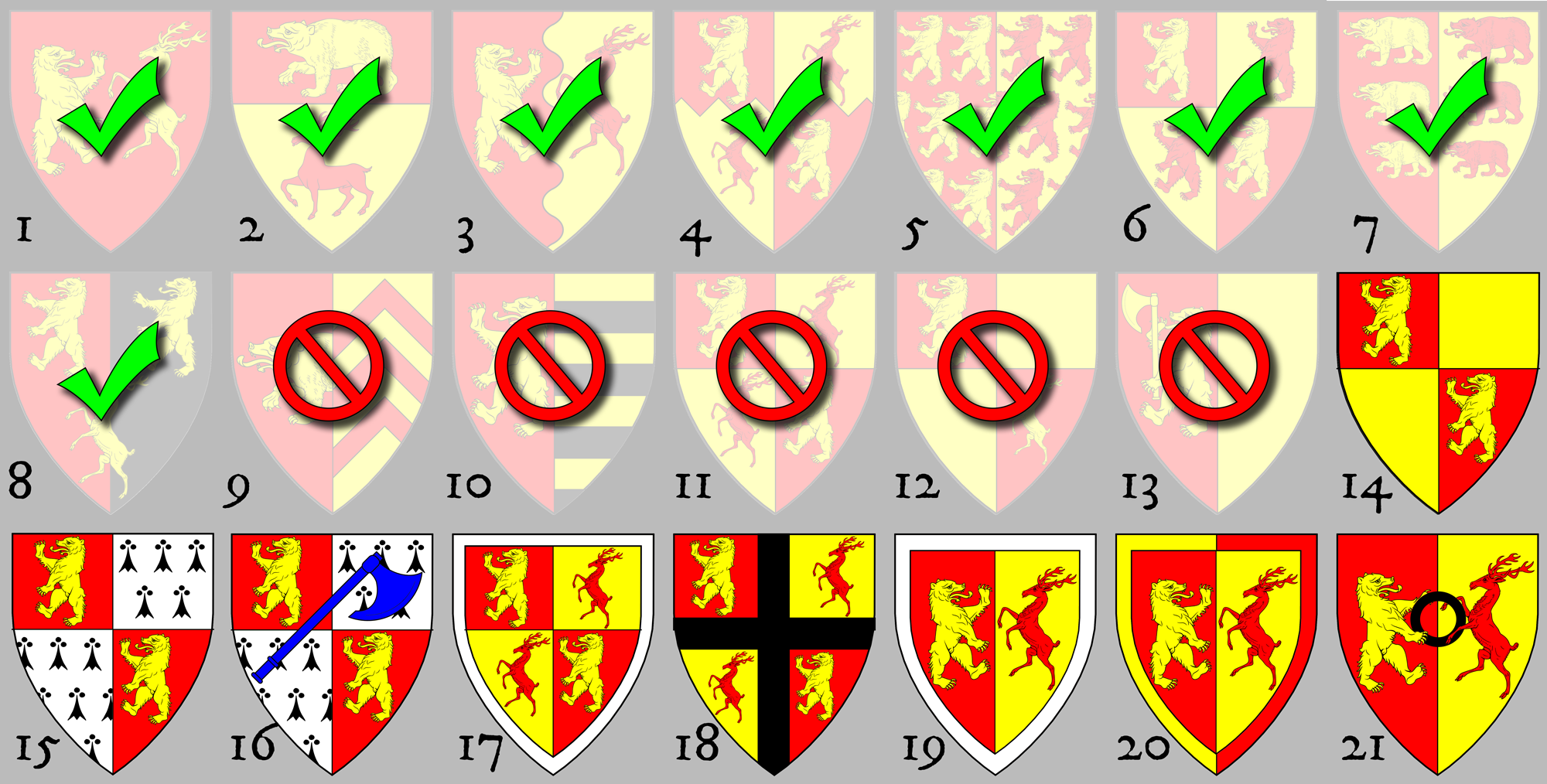 Designs which May or May Not Create the Appearance of Marshalling

The first two sections are straightforward, while the third section has more ambiguity, requiring a closer read.

A6F3a states that “When each section of the design appears to be an independent coat of arms, it creates the unmistakable appearance of marshalling. A section of the design does not appear to be an independent coat of arms if it is a plain tincture, including a fur, which we do not protect as arms.” Because of this, design 14, which has plain, uncharged Or fields, is clear of the appearance of presumption.

However, the rule goes further to state that “As the protected arms of Brittany are Ermine, the use of an uncharged ermine section or sections when combined with a charged section creates the appearance of marshalling. However, since flags would not be used as part of quartered arms, the use of an uncharged vert section or sections does not create the appearance of marshalling, even though we protect the flag of Libya as Vert.” Design 15 appears to be a quartering of Gules, a bear rampant Or and the arms of Brittany, Ermine. This eliminates the design from consideration. 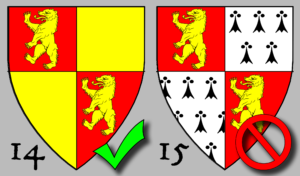 A6F3b states that “In many cases, a design with a charge or charges that cross the quarterly lines of division does not create the appearance of marshalling.” Design 16 has a central charge which crosses the quarterly line of division. Therefore, even though it’s otherwise the same as design 15, the central axe avoids any appearance of marshalling.

However, the rule goes further to state that “marshalling using a quarterly line of division was inherited. Once inherited, the quartered arms might be further cadenced with added bordures, labels, or other charges used for cadency in period. Therefore, adding those charges does not remove the appearance of marshalling for armorial designs with a quarterly line of division. Crosses throughout were also added to marshalled designs, so the addition of a cross throughout that overlies a quarterly field does not remove the appearance of marshalling.” The bordure in design 17, though it crosses the line of division, is nonetheless a common mark of cadency especially in Scotland. Therefore the design appears to be the arms of a cadet branch of the union between Gules, a bear rampant Or and Or, a stag rampant gules. Likewise, the cross in design 18 entirely overlays the line of division, but its presence alone doesn’t remove the appearance of quartered arms.

A6F3c states that “As marshalled arms using a per pale line of division were not inherited, the addition of a charge or charge group which crosses the per pale line is generally sufficient to remove the unmistakable appearance that a portion of the field is independent armory. The addition of a bordure or chief that does not itself appear to be part of two distinct original arms also removes that appearance. In general, a chief or bordure which has poor contrast with one side of the field or one that is charged so that identical charges or parts of charges appear on both sides of the line of division or bordure meets this standard.” Design 19 has an argent bordure which has poor contrast with half of the field, so it does not appear to be marshalled armory. Likewise, design 21 has a sable annulet crossing the line of division, with poor contrast against half the field.

However, the rule goes on to state that “On the other hand, in Per pale purpure and Or, a chief per pale argent and sable the chief divided per pale creates the appearance of marshalling Purpure, a chief argent with Or, a chief sable.” Design 20 has a counterchanged bordure which has good contrast on either side of the line of division. It therefore appears to be a Gules, a bear rampant to sinister within a bordure Or impaled with Or, a stag rampant within a bordure gules. 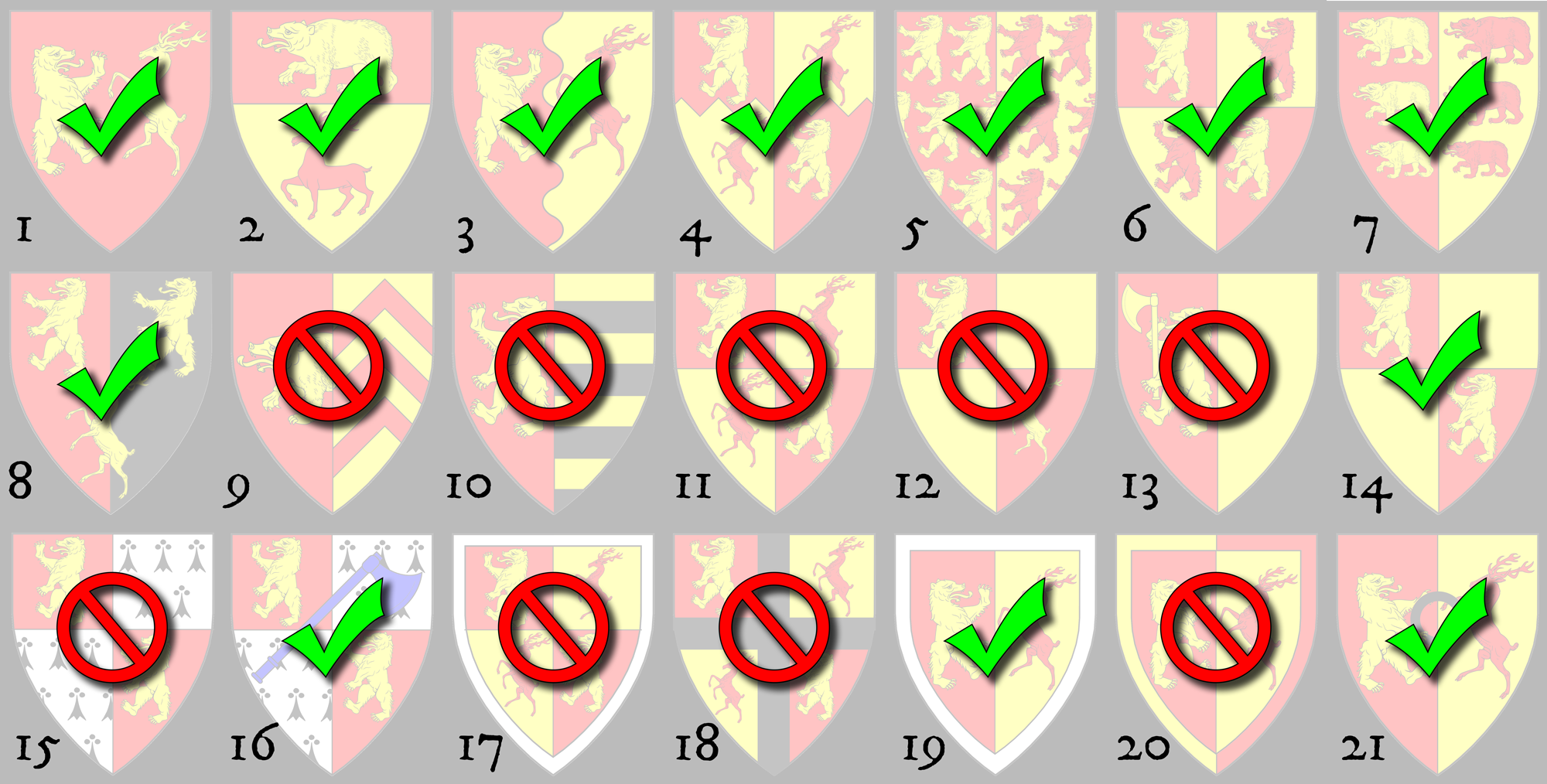 Avoiding the appearance of marshalling is pretty easy to do. Just make sure that the arms you’ve designed do one of the following:

Failing that, make sure your design doesn’t:

If have a plain quarterly or per pale line of division but have avoided the pitfalls above, make sure your design either:

© 2015 Kevin Rhodes. All rights reserved. Limited publication rights may be granted upon written request to the author.