This article marks the culmination of a series covering the various types of heraldic flags found in the Middle Ages, providing enough of an overview to their use to inspire the reader to design and paint their own. However, unlike the other articles, which focus on historical examples and patterns, this article uses the information already covered to discuss SCA practice. It is recommended that you review the banner, standard, and pennon articles before you read this one.

Like many niche interests in the SCA, the study of pre-17th century heraldic flag design is plagued by a lack of available research, a lot of misinformation, and the unfortunate truth that Europe was not a static monoculture for a millennium. Any blanket statement about “period flags” is either generalized to the point of uselessness, or else turns out to be culture- and time-period specific and is likely not to apply to another time or location. Sizes and shapes of each flag type, their construction and intended purpose, and even the terms used to describe them are fluid from one century to the next.

That said, in looking at the larger picture of flag design and use in period, an artist may find patterns and trends which can be useful when creating a new piece for heraldic display which reflects historical sensibilities and embraces the medieval and renaissance aesthetic. One may attempt to make a flag based on a particular model from a manuscript or extant piece, while another may synthesize the intent of one flag with the structure of another into an improved flag design that makes sense, even if it’s not plausible to a particular moment and location in history.

And then there’s SCA-typical flag design.

Content warning: Unflinching criticism about accepted cultural norms in the SCA. While not intended as a personal attack, there is a high likelihood of being taken personally due to the nature of art and self-expression as guided by traditions. Proceed with caution.

There is a very common flag in the SCA that has no basis in pre-17th century armorial design, and whose layout is antithetical to the entire purpose of flags and heraldry as a means of identification. Even the term traditionally applied to the flag is wrong.

I am, of course, talking about the SCA “banner.”

Not the banner, a historical flag devoted to the display of the owner’s arms (that’s another article), but instead the SCA “banner.”

Each of these badges is displayed in its own self-contained space along the length of the flag, sometimes with each space separated by a transverse band containing a motto, and frequently with each compartment having a different background color.

There are regional variations on this. Not all traditions include awards and offices in their layout. Not all traditions use bands to separate the badges and motifs. Some traditions will include prior affiliations and sub-regional groups, while others focus entirely on the current location and status of the owner. But the general pattern of showing badges of affiliation remains the same.

Below, I’ve designed a typical SCA “banner” as I might have displayed in 2006, when I lived in the Barony of Lyondemere in the Kingdom of Caid. The flag shows the populace badges of Caid, Lyondemere, the badge for the Order of the Dolphin (Caid’s armigerous service award), the the badge of the herald’s office, and my own arms.

It’s a very pretty design…but it’s not a banner. It follows no historical model. It becomes obsolete the moment any portion of the flag changes. And it combines the worst drawbacks of actual historical flags to create a bizarre Frankenstein’s monster that fails to achieve any of the goals of heraldic display.

A banner is a type of heraldic flag that displays the owner’s arms and only their arms. Banners were squares or tall rectangles flown from a vertical pole. A banner is sometimes plain, but sometimes decorated with fringe or dags.

The closest medieval equivalent to what many the SCA call a “banner” is the standard, especially the badge-standards popular in England starting in the 15th century. A standard was a long, tapering flag that had the kingdom badge in the hoist and frequently had diagonal stripes that displayed the owner’s motto. In looking at historical standards, we can see the inspirations that led to the SCA “banner.”

For more information about the layout and design of historical standards, see my article on standards and guidons.

However, medieval standards had a different purpose, and functioned differently from the SCA “banner.”

A standard was a rallying point for large military units under the orders of a single commander. The kingdom badge appeared in the hoist as an indicator of the unit’s loyalty to a particular side of a war. But unlike the SCA “banner,” which uses the rest of the fly to show ever-finer degrees of allegiance and affiliation for the owner of the flag, the historical standard displayed only the owner’s own livery and badges. Thus, the Lyondemere populace badge would only appear on a standard owned by the Baron of Lyondemere, flown over his forces.

A flag in motion

Unlike the SCA “banner,” a standard’s field and badges repeated throughout the design, and with good reason. The standard was a large flag (some treatises describe them as long as 21 feet!), and would not often be seen flying on full display. The repeated badges and the livery colors appearing throughout the length of the standard ensured that no matter the angle and no matter the amount of wind, the viewer would be able to see enough of the design to see the livery and badges.

As an example, let’s look at one of the standards of Edward IV:

This design has a large and recognizable lion close to the hoist. The blue and red livery field extends from the populace badge (the cross of St. George) to the swallow-tailed fly. The red and white roses repeat throughout the length of the flag. 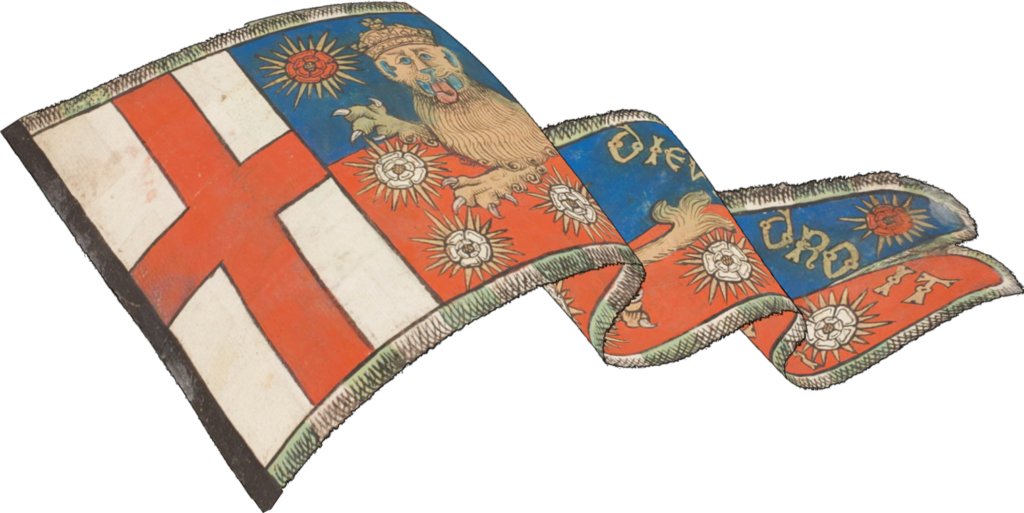 Because of this, the viewer can see the red and blue livery and the rose badges at any point in the length of the flag, and the lion is visible due to its proximity to the hoist.

Compared to the historical model, there’s a *lot* going on in this design. Rather than functioning as a cohesive whole, each section of the flag is its own stand-alone design, each successively more specific until we get to the individual identifier in the very tail end of the fly. The fly moves the most in the wind, and is thus the hardest to see. 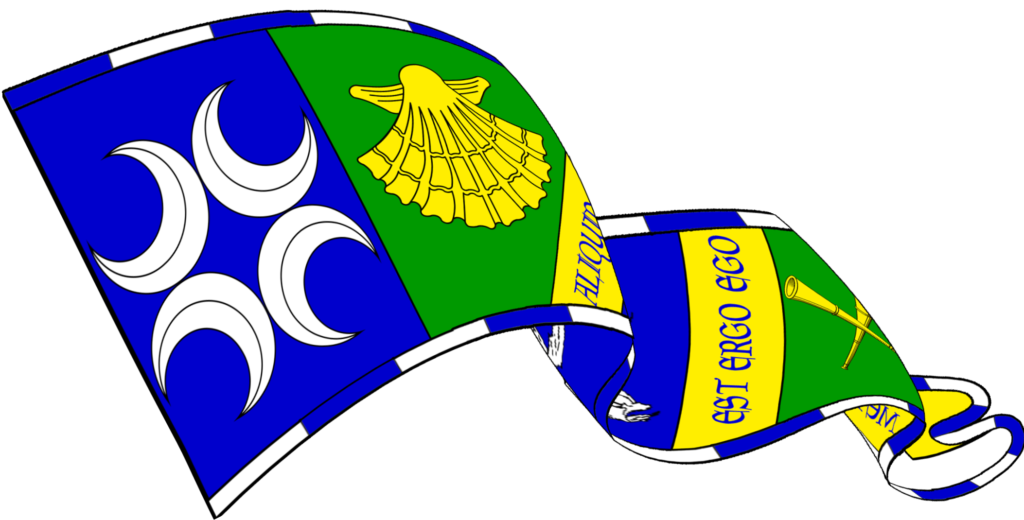 In this moment, one may see the badge of Caid and Lyondemere, part of a motto, and half of a herald’s badge.

Who does this SCA “banner” belong to? It’s difficult to tell, while in motion. And if the identity of the flag’s owner can’t be determined, it’s not serving its function.

As flags fly in the wind, they receive damage. Typically, the first part of any flag to fray and tatter is the fly.

For my 2006 SCA “banner,” the fly contains the only personal marker on the entire flag, my arms. And once this portion of the standard frays and rips away, what’s left?

Who does this flag belong to? Someone in the Barony of Lyondemere, a current or former herald, maybe. This could be any number of people.

Another issue with the SCA “banner” is change. Silk flags are expensive. What if you move to another barony? What if you leave your household, or join a new one? What if you redesign your arms, get a new award, or take on another office?

In January 2007, I was admitted to the Order of the Crescent, the Grant-level service Order, so I replaced the badge.

Four months later, I moved 30 miles north to the Barony of the Angels, and changed the escallop for seraph’s wings.

Over the next few years, I focused on developing my household, Poore House, which was more of a focus for me at the time than my role as a herald. Thus, I took off the crossed trumpets and replaced them with the badge of my household, Per bend Or and argent.

Then, in 2011, I received a court barony from the Crown of Caid, and rearranged the standard a bit.

The following year, I was elevated to the Order of the Pelican, and added the badge to reflect this.

In 2017, I moved to Portland, and the Barony of Three Mountains in the Kingdom of An Tir. This caused a change in two of my badges, the transverse bands and motto colors, and the fringe.

However, I found myself playing more often in the adjacent Barony of Dragon’s Mist, and ended up serving the court of the Baron and Baroness.

For me, that’s 8 different designs in a dozen years.

There are so many reasons the layout of your SCA “banner” might need to be revised, and you’re going to have to spend a lot of time and money to keep up.

So the SCA “banner” is objectively a terrible design. It’s not period, it’s hard to read, it fails to effectively identify its owner, and it becomes obsolete anytime the owner moves, gets a new award, changes households, or takes on a new volunteer role. But you still want a flag showing your kingdom, principality, region, barony, canton, college, household, offices, and awards. How do you do this in a period manner?

Pennons are small flags that were frequently attached to spears and other polearms, but can be flown just about anywhere. They were usually about 1′ tall and typically not longer than 3′, and they displayed a single badge. When you take apart the SCA “banner,” you end up with several pennons.

Pennons are more economical to make, taking up a tiny fraction of the fabric of a standard or SCA “banner.” They’re also easier to make, and you can craft several at a time. For example, on a single yard of fabric 45″ wide, you can make six pointed pennons, 3′ long and 1′ tall, with space to hem. You can also make single pennons using scrap fabric from other projects.

A plethora of pennons also provides options in display. If you’re in your own kingdom, you don’t necessarily need to represent your kingdom pride. However, if you’re at an inter-kingdom event, your kingdom pennon can fly proudly. You may not want to advertise your role as a marshal, but you have a pennon to mark Marshal’s Point if you need it. If you move from one barony to another, you can gift your old baronial pennon and make a new one to display your new barony’s populace badge, while the rest of your pennons remain the same.

Finally, we have documentation that multiple flags flew from the same pole in period. Following that pattern, you can display all of these populace badges as pennons flying underneath a banner displaying your arms, or a standard displaying your personal badges and livery At a glance, the casual viewer can spot your banner or standard, followed by each allegiance or affiliation tied to your banner pole.

Below are several examples of pennons in action, with the banner-and-pennon display of the first and last SCA “banners” above, a display with awards, a standard with pennons showing subsidiary allegiances, and a banner with a badge of office.

In this article, we learned:

These are banners, which display the owner’s arms

This is a standard, which displays the owner’s primary allegiance, livery, and personal badges

These are pennons, which can display any single device or badge, including populace badges, household badges, personal badges, awards, and offices 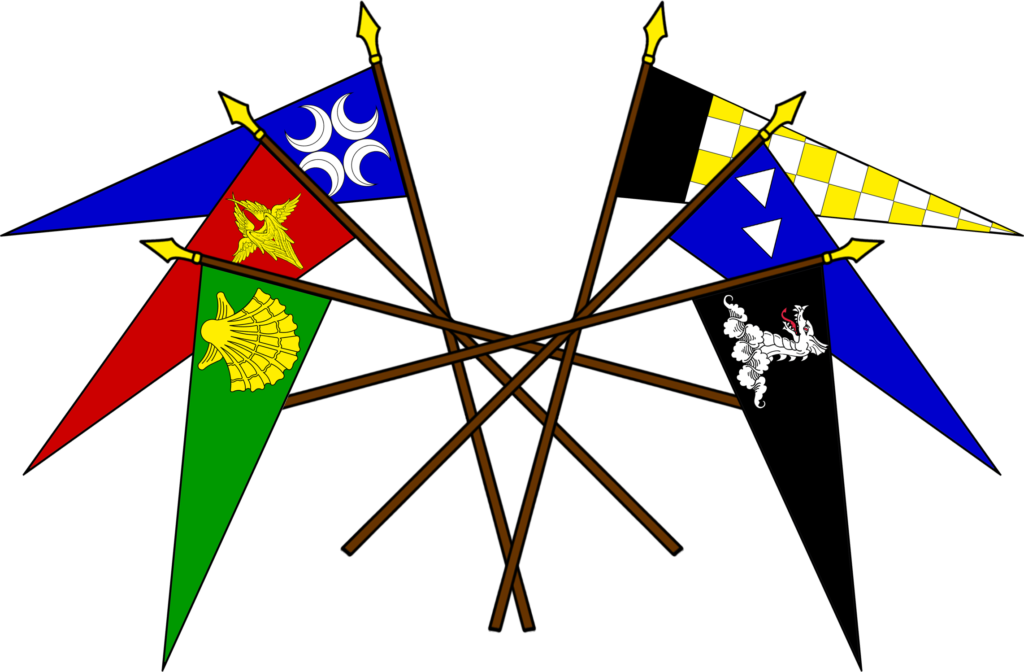 And this flag is a bunch of pennons that have been painted on a single strip of silk in the rough shape of a standard and incorrectly labeled a “banner.”

So the next time you want to create a heraldic flag in the SCA: